Zeptosecond: The smallest slice of time that founds ever. 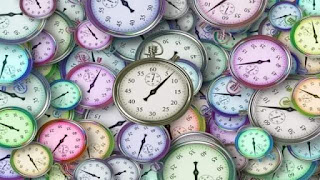 A team of physicists has now taken the lead in the race to measure the shortest time spans. For the first time, physicists were able to measure a process that lies within the time range of zeptoseconds. The process they have measured was the propagation of light within a molecule. A zeptosecond is a trillionrh of a billionth of a second. In 1999, an Egyptain chemist received the Nobel Prize for measuring the speed at which molecules change their shape.

He founded femtochemistry using ultrashort laser flashes. In femtochemistry, the formation and breakup of chemical bonds occurs within femtoseconds. A femtoseconds equals 0.000000000000001 seconds. Now atomic physicists have for the first time studied a process that is many times shorter than femtoseconds. They measured how long it takes for a photon to cross a hydogen molecule. They found that the process requires about 247 zeptoseconds for the average bond length of the molecule. This is the shortest time span that has been successfully measured to date.

The scientists carried out the time measured on a hydrogen molecule. Which they irradicated with X-rays from a synchrotron lightsource. The researchers set the energy of the X-ray so that one photon was sufficient to eject both electrons out of the hydrogen molecule. The scientist measured the interference pattern of the first ejected electron.

Simultaneously, they determined the orientatiin of the hydrogen molecule. Now that they knew the spatial orientation of the hydrogen molecule. They used the interfrence of the 2 electron waves to precisely calculate. When the photon reached the first and when it reached the second hydrogen atom. The two steps required up to 247 zeptoseconds depending on how far apart in the molecule the two atoms were.

Additionally, scientist observed for the first time that the electron shell in a molecule does not react to light everywhere at the same time. The time delay occures because information within the mokecule only spreads at the speed of light.