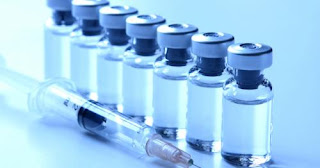 New vaccine prevents an incurable blood cancer from returning, early clinical trial suggests. A phase I/II clinical trial suggests that vaccines prepared from a patient’s own tumor cells may prevent the incurable blood cancer mantle cell lymphoma (MCL) from returning . The study reveals that vaccines are a safe and effective way to induce the body’s immune system to attack any tumor cells that could cause relapse.

MCL is generally treated with a combination of chemotherapy and immunotherapy. It is often accompanied by hematopoietic stem cell transplant. The transplant aims to restore the body’s ability to form healthy blood cells. But cancer usually returns after this type of therapy.  The average survival time for MCL patients is 5-7 years. In the study, 47 MCL patients were vaccinated with their own, CpG-loaded, tumor cells. The patients’ immune cells were then collected and saved. While the patients received a stem cell transplant.

Finally, the immune cells were transferred back into the patients who were then monitored for signs of their MCL returning. Researchers first concluded that the vaccine is safe. Over the next year, 89% of the patients’ blood contained too few cancer cells to form new tumors. Of the patients, 40% immune cells capable of directly attacking and killing cancer cells. These patients appeared to be especially well protected from disease relapse. It has recently becomes clear that our immune system can cure cancer.

Researchers have previously used a non-customized approach called in situ vaccination. Immunoenhancing agents are injected locally into one site of the tumor. These agents trigger a T cell immune response locally that then attacks cancer throughout the body. When a tumor cells as abnormal and infiltrate and attack them. But as cancer progresses, the tumor suppresses the activity of the T cells. The new vaccine works by reactivating the suppressed T cells. In previous studies, the treatment eliminated cancerous tumor in 87 out of 90 mice. This was still possible even when the tumors had spread to other parts of the body.