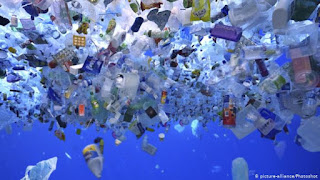 Which can be used as a clean fuel, and high-value solid carbon. A team of researchers has developed a method of converting plastic waste into hydrogen gas. Industries can benefit from the gas as a clean fuel and valuable solid carbon. This was achieved with a new type of catalysis developed by the team. Which uses microwaves to activated catalyst particles to strip hydrogen from polymers.  The process shows that over 97% of hydrogen in plastic can be extracted in a very short time.

This process is also a low-cost method with no CO2 burden. The approach was demonstrated by researchers on widely used, real-world plastic waste. The findings detail how the researchers mixed mechanically-pulverized plastic particles with a microwave-subsector catalyst of iron oxide and aluminum oxide. The one-step process typically takes 30-90 seconds to transform a sample of mechanically pulverized commercial plastic into hydrogen and multiwalled carbon nanotubes.

The mixture was subjected to microwave treatment and given a large volume of hydrogen gas and a residue of carbonaceous materials. The bulk was identified as carbon nanotubes. This rapid one-step process for converting plastic to hydrogen and solid carbon significantly simplifies the usual processes of dealing with plastic waste. The new method provides an attractive solution for the problem of plastic waste. Instead of increasing pollution, plastic could be used as a valuable feedstock for producing clean hydrogen fuel and value-added carbon products.

The ever-increasing production and use of plastic over the last 50 years has created a huge environment problem for the world. Half of all plastics ever manufactured have been made in the last 15 years. Every year, about 8 million tons of plastic waste ends up in the oceans. Currently, most of the 4.9 billion tones of plastics ever produced will end up in landfills or the natural environment. This number is expected to increase to around 12 billion tones by 2050.