Water discovered on the moon.

NASA just announced the discovery of water on the Moon's surface. Astronomers from NASA gathered strong evidence for the existence of water on the moon. This discovery may alter future missions to the moon and deeper space exploration. Our moon doesn't have an atmosphere that insulates it from the sun's rays.

Therefore, scientists have always assumed that the moon's surface was dry. But in the 1990s, an orbiting spacecraft found indicates of ice in large and inaccessible creators near the moon's poles. Then in 2009, imaging spectrometers onboard Chandrayaan-1 spacecraft recorded signatures consistent with water in light reflecting off the moon's surface. 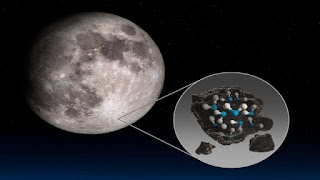 But it was impossible to know if this really was H2O. Now NASA's Stratospheric Observatory for Infrared Astronomy (SOFIA) has confirmed that water exists on the sunlit surface of the Moon. This discovery shows that water might exist across the lunar surface and not only limited to cold but also shadowed places.

SOFIA has detected water molecules (H2O) in the Calvirus crater. It is one of the largest craters located in the Moon's southern hemisphere. Data from this location reveal water in concentrations of 100 to 412 parts per million trapped in a cubic meter of soil spread across the lunar surface.

As a comparison, the Sahara desert has 100 times the amount of water that SOFIA detected in the lunar soil. Scientists don't know how small amounts of water are created and how they persist on the harsh, airless lunar surface. 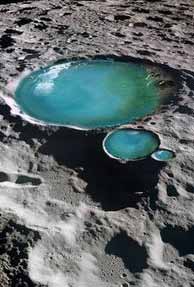 Without a thick atmosphere, water on the sunlit lunar surface should just be lost to space. But researchers said something is generating the water and something is trapping it. When the Apollo astronauts first returned from the Moon in 1969, the Moon was thought to be completely dry  Orbital and impactor missions over the past 20 years confirmed the existence of ice.

Other missions found evidence of hydration in sunnier regions. SOFIA flies at altitudes of up to 13,700 meters (45,000 feet). Using its faint object infrared camera for the SOFIA telescope. SOFIA was able to pick up the specific wavelength unique to water molecules.