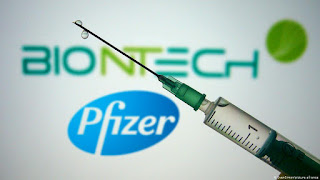 In what could be a potential breakthrough in the battle against livid a vaccine developed by Pfizer in beyond tech has shown a 90 percent efficacy rate in a trial with more than 43000 participants the companies also saying no serious safety concerns have been observed and that the results have been analysed by an independent committee Pfizer's CEO calling it a great day for science and humanity the announcement comes amid a fast-growing and deadly fall surge which president-elect job biden has pledged to fight biden is expected to appoint leaders of his coronavirus task force as soon as pospossibe.

Today I will spare no effort none or any commitment to turn around this pandemic coronavirus cases are climbing in nearly every corner of the country the seven day average now more than a hundred thousand new cases per day large crowds gathering nationwide to celebrate the election adding to concerns about the viruses spread in hot spot states like utah families including lindesy wootens have been devastated her parents were both hospitalized spending their 34th wedding anniversary in the ICU.

My dad was able to come up to hospital in time to hold my mom's hand as she passed her mother just 56 her father survived but may never fully recover wooten who also lost her grandfather to the virus says many in her parents community had been skeptical about covi it was really frustrating that people were turning this political.

That people were bickering back and forth whether to wear a mask or not wear a mask it isn't political this morning one family's pain as scientists work to provide hope for all negative pressure rooms like this one where they treat covet patients are going to be critical in the days to come and they could quickly fill up as for that vaccine pfizers says over the next couple of days they'll release safety information hoping to roll out millions of doses around the world of that vaccine by the end of this year certainly tens of millions by the next.