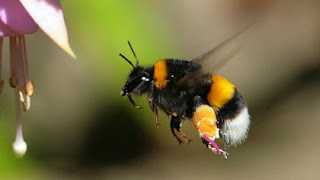 New study confirms that bees stop buzzing during a total solar eclipse. The bees were active and noisy right up to the last moments before totality. The project engaged more than 400 participants. Including scientists, members of the public, and school teachers and students. They set up 16 monitoring stations in the path of totality in Oregon, Idaho, and Missouri. Small USB Microphones were hung on lanyards near bee-pollinated flowers in areas away from foot and vehicle traffic. In some of the locations, light and temperature data were also captured.

Participants then sent the devices to the researches where the recordings were matched up with the eclipse periods from each location and analysed for the number and duration of bee flight buzzes. The recordings didn't allow for differentiation between bee species but observations indicated most bees monitored were bumble bees or honey bees. The data showed that bees remained active during the partial-eclipse phases both before and after totality but they essentially ceased flying during the period of totality. 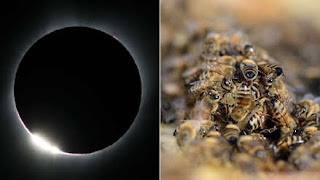 Just 1 buzz was recorded during totality in all of the 16 monitoring locations. However, shortly before and shortly after totality bee flights tended to be longer in duration than at times early in the pre-totality phase late in post-totality. Researchers interpret these longer flight durations as an indicator of slower flight under reduced light or possibly as the returning to their nests. Bees commonly fly more slowly at dusk and return to their colonies at night. The same behavior by a solar eclipse offers evidence about how they respond to environmental cues when those cues occur unexpectedly.

The eclipse gave the opportunity to ask whether environmental cues would after the bee's behavioral response to dim light and darkness. The findings demonstrate that complete darkness elicits same behavior in bees regardless of timing or context. And that's new information about bee cognition.