Siphonophores are some of the most amazing creatures of the deep! 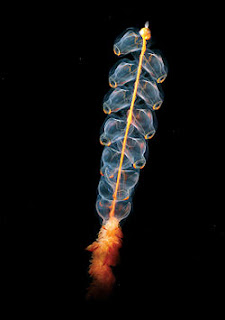 Siphonophores are unusual relatives of jellyfish and coral. They are usually found attached to the seafloor. Siphonophores are both one animal and a colony of animals. A siphonophorae starts life as a single embryo but that embryo clones itself into hundreds or thousands of conjoined twins. One unusual species is called the dandelion animal. It appears from a distance as a pulsating, faintly glowing, organe-yellow ball. It is a siphonophorae species that was discovered in the deep-sea hydrothermal opening. Some siphonophores are the longest animals in the world. They have specimens as long as 40 meters. 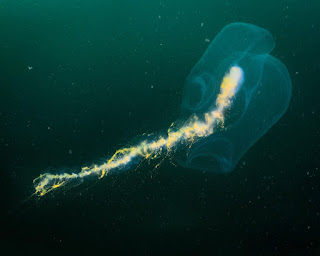 The order Siphonophorae constis of colonial hydrozoans that live in the water column. Siphonophores are divided into 3 suborders: the Calycophorae, the Cystonectae and Physonectae. The name dandelion animal is associated with a specific species of Rhodalidae and Thermopolis. The shape of the dandelion animal explains how this species develops. The egg hatches a larva that will continue to elongate as it grows. As the dandelion animal larva elongates, the end away from the mouth will fold back upon itself and form a gas-filled float or pneumatophore.

At the upper end of the colony, the remainder of the larva forms a stem. In the region below the pneumatophore, the stem will begin to bud zoodis. These will develop into nectophores which are tiny medusa. After the nectophores, the stem gives rise to a variety of zooids. Zooids are specialized in feeding, reproduction and defense. The longer brown structures that look like worms are the feeding gastrozoodis. Gastrozooid is a zooid with a mouth and digestive cavity.