Space Hurricane detected over the north pole for the first time! 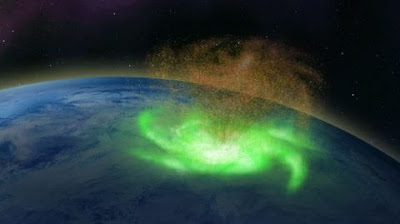 Scientists observe a space hurricane over the North Pole for the first time. Until recently, it was uncertain that space plasma hurricanes even existed. Now scientists were able to prove their existence. The findings shed new light on the relationship between planets and space. The space hurricane analyzed by the team in Earth's ionosphere was spinning in an anticlockwise direction.

It had multiple spirals arms and lasted almost 8 hours before gradually breaking down. The unprecedented observations were made available by satellite images. A recent analysis allowed scientists to create a 3d image of the 1,000 kilometers wide swirling mass of plasma. The hurricane was several hundred kilometers above the North Pole raining electrons instead of water. 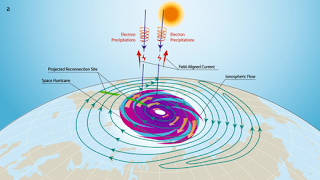 When warm, moist air rises, it creates an area of low pressure near the surface that sucks in the surrounding air. This phenomenon would cause extremely strong winds and create clouds that lead to heavy rain. Hurricanes have also been observed in the lower atmospheres of Mars, Jupiter, and Saturn.

Gigantic solar tornadoes have been seen in the atmosphere of the Sun. However, the existence of space hurricanes in the upper atmosphere of planets has been detected before. The team of scientists used observations made by 4 satellites and 3d magnetosphere modeling to produce the image.