A massive glacier in Alaska is moving 100 times faster than normal. 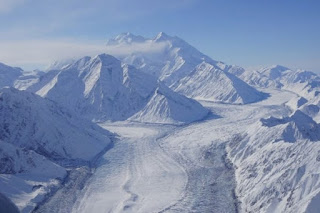 A massive glacier in Alaska is moving 100 times faster than normal. The Muldrow Glacier on Mt. Denali is on the move for the first time in 64 years. Geologists call this phenomenon a "surge" which is a rare, naturally occurring movement of the ice. Glacial surges are only found 1% of glaciers. They are short-lived, cyclical events that usually occur times of years apart. During a surge, ice is transferred from a reservoir area in the upper portion of the glacier to the terminus.

The Muldrow has surged at least three times in the past 200 years. The Glacier surges once every 50 years. The last surge happened in 1957. At that time, the glacier advanced over 6.5 kilometers (4 miles). A previous surge occurred sometime between 1906 and 1912. The Muldrow Glacier is a 62-kilometer-long (39 miles) glacier. The Muldrow Glacier is moving up to 20 meters (65 feet) per day. The glacier usually moves between 10 to 30 centimeters (4 and 11 inches) per day.

Some scientists believe that climate change is changing the surge cycles. The surge could lead to the burst of dangerous floods. The surge was first spotted by a pilot who was flying near the north side of Denali. The pilot multiple, unusual cracks in the smooth glacier. The glacier's movement is also creating a clear seismic signal. The cracking, popping, ice-fall, and grinding of the ice has caused an increase in the noise.

Sensors recorded a clear increase in energy in December 2020. Researchers, governments and local communities are working to reduce the danger in the risk zones. Their efforts mainly focus on monitoring hazards identifying places most at risk and expanding field and satellite data.