Five Biggest Dinosaurs that have existed.

Top 5 biggest Dinosaurs that have existed. 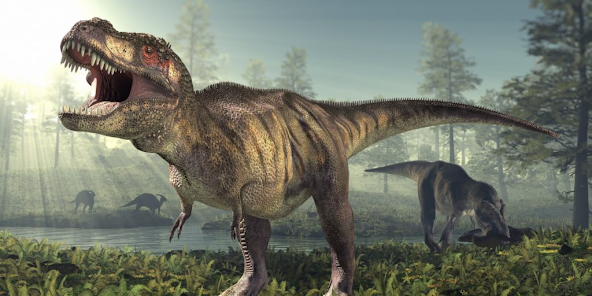 What is the biggest dinosaur you can think of? We all know that dinosaurs came in all shapes and sizes. And sure, they all have things, that make it interesting. But no one can deny that there's just something incredible about the idea of truly massive, scaly beasts walking the lands we live on today. Here are 5 of the biggest prehistoric beasts that ever lived.  Tyrannosaurus rex one of the largest meat-eating dinosaurs to ever roam the Earth. Everything about this was designed for maximum bone-crushing action. T. Rex was about 12m (40 ft) long and about 5 to 6 m (15 to 20 ft) tall.
Its strong thighs and long, powerful tail helped it move quickly and its massive skull had the ability to absolutely crush prey. This monster could eat up to 230kg (500 lb) of meat in one bite. T. rex crushed and shattered bones at its ate. In fact, broken bones have been found in its dung. Argentinosaurus was about 115 feet long and probably weighed around 73 to 85 tons. In other words, this dinosaur weighed more than 10 African elephants put together and it had a thigh bone taller than the man who helped dig it up. These massive beasts are believed to have walked the Earth about 92-100 million years ago.
It is estimated that the typical dinosaur egg of the Argentinosaurus was about the size of a beach ball. That means that the chicks from these dinosaurs had to grow 25,000 times their original size before they reached adulthood. The next dinosaur is a mouthful in more ways than one. Carcharodontosaurus means shark-toothed lizard. The jaw of this beast full of serrated teeth that were 20-centimeters (8 inches) long. These could slice through flesh like switchblades through butter and leave enormous gaping wounds that would quickly incapacitate prey.
Carcharodontosaurus was a powerful carnivore that measured abound 13 meters in length and weighed 6 tons, making it one of the largest theropod dinosaurs of all time. With a weight of nearly 14 tons (Around 8000 kg) and a length between 40 and 43 feet, Giganotosaurus certainly earned its name. Giganotosaurus was an enormous predator-even larger than the tyrannosaurus rex! Getting cornered or run down by this massive beast could mean certain death for nearly any creature.
Studies suggest it had a keen sense of smell, which, coupled with its athletic prowess and eight-ton bulk, made it a formidable foe. Mosasaurus was a water-dwelling dinosaur. This ocean best was so huge, it could eat sharks as snacks. The Mosasaur might be enough to convince you that the oceans during the time of dinosaurs would be even scarier than being on the land.
While it's the only ocean animal on this list, it's definitely one of the most powerful. These were just a few of the mightiest beasts that remained at the top of the food chain for thousands of millennia. If you had the chance, would you want to see these creatures in person?