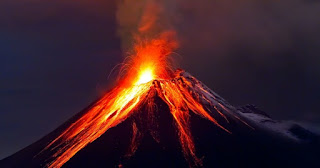 NASA satellite data could detect volcanic unrest years before eruptions. Using satellite data, scientists at NASA have developed a new method that could help us predict volcanic eruptions years before they happen. The new method is based on a subtle increase in heat emissions over large areas of a volcano in the years before the eruption. According to scientists, these signals allow them to see that a volcano has reawakened. For the study, the team analyzed 16.5 years of radiant heat data using instruments on NASA satellites. Despite the differences between the volcanoes, they showed the same results.

In the years leading up to a volcanic eruption, the radiant surface temperature increased by around 1ºF (1.64ºF). It decreased after each eruption. The scientists believe that the heat increase may result from the interaction between magma reservoirs and hydrothermal systems. Magma is molten rock below Earth's surface. It contains gases and other fluids. When rises through a volcano, the gases diffuse to the surface and can give off heat that is detected by NASA instruments. Similarly, this degassing can facilitate the up-flow of underground water which can increase soil temperature.

The data help to supplement existing tools used at monitored volcanoes. Around 1,500 volcanoes have monitoring systems. Scientists usually depend on an increase in seismic activity, changes in gas emissions and sudden ground deformation to predict volcanic eruptions. But these are not enough to accurately predict such eruptions. This is mainly due to the fact that each volcano reacts differently. Under the best of circumstances, scientists can accurately forecast an eruption several days before it happens. In using new satellite data, scientists can increase the scope of what can and should be monitored on a regular basis