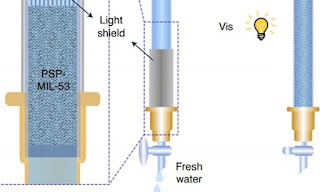 Scientists made salty water safe for drinking in just 30 minutes. A team of scientists has developed a method to clean drinking water using sunlight. This sustainable method can create around 151 liters (40 gallons) of drinking water per cycle. More than 2 billion people around the world struggle with access to safe water drinking. These individuals are at risk of catching fatal waterborne diseases such as typhoid and polio. The World Health Organization expects this at-risk population to grow over the next 5 years as the climate crisis creates more and more water-stressed areas.

Scientists have been working to provide clean drinking water for decades. But most solutions consume a lot of energy. Thermal desalination processes by evaporation are energy-intensive while reverse osmosis consumes a lot of energy and chemicals to clean water. This means energy could create an obstacle to the implementation of such solutions in communities without stable electricity. But sunlight is the most abundant and renewable source of energy on Earth. Now a team of scientists has proposed a sustainable solution to start the filtration process.

The solution relies on sunlight instead of heat or electricity. Using an extremely porous material to separate salt from salty water. Researchers nearly 151 liters (40 gallons) of clean drinking water per single kilogram of a metal material. The compound was able to absorb enough water in 30 minutes to filter this quantity. Researchers explain that another key factor in the success of the desalination process is the material the researchers chose to use.

This material is a type of metal compound that is made of metal ions that were configured into a crystalline pattern this compound is extremely porous because of its unique crystalline structure. The researchers further enhanced the absorption of this material by adding another material (PSP-MIL-53) to its pores.

This material is known to have "breathing effect", which allows efficient absorption. The drinking water produced was even cleaner than WHO's official guidelines. Additionally, the solar-powered method desalinates salty or stagnate water in a more sustainable way and better than previous methods.