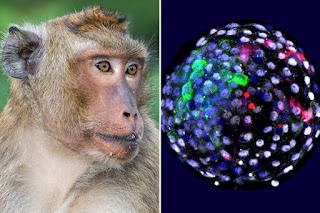 Scientists have created the first embryo made of monkey and human cells. The embryos were kept alive for 19 days in laboratory dishes. US, Chinese, and Spanish scientists reported the creation of chimeric organisms made of cells from two or more species. The experiment was partly motivated by the hope of developing new ways to produce organs for people who need transplants. Demand for organ transplants is much higher than the supply and these experiments can help many patients.

But this research also raises a variety of concerns especially from an ethical point of view. In a previous study, researchers incorporated human cells into early-stage pig tissue. This was the first step toward producing human organs using large animals. But the human cells did not show good results. Researchers theorized that this could be due to large evolutionary distance between the 2 species. So researchers decided to try chimera formation with monkeys. Monkey embryos stayed alive and grew outside the body for monitoring purposes.

But all experiments were terminated 19 days after stem cell injection. The scientists found that human stem cells survival and integration was far better than the pig tissue experiment. Scientists said that these cells won't be used for human organ transplants. But they will provide very important insights about how human cells develop and integrate and how cells of different species communicate with one another. Chimerism could also offer unique insights into the aging process.

Researchers hope that growing human cells could solve the organ shortage problem. Thousands of people die every year waiting for an organ transplant. The World Health Organization says that 130,000 organ transplants are performed every year. But these represent only 10% of the actual need for organs.