Scientists discover fossil of a dinosaur sitting on a nest of eggs. 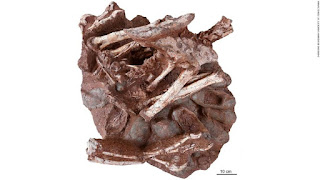 Scientists Discover World's first well-preserved dinosaur sitting on a nest of eggs. The fossilized babies were almost ready to hatch. The fossil consists of an incomplete skeleton of a large adult oviraptorid crouched in a bird-like brooding over a clutch of at least 24 eggs. Researchers suggest that the mother died in the act of incubating its nest. At least 7 of the eggs preserve bones or partial skeletons of unhatched oviraptorid embryos inside. The fossil belongs to an oviraptorosaur. These are a group of bird-like theropod dinosaurs from the Cretaceous Period.

The new specimen was recovered from 70 million years old rocks in China. Oviraptorids were originally thought to eat eggs because a skeleton was found near a nest. But researchers concluded later that their jaws are not useful for eating eggs. Dinosaurs preserved on their nests are rare and fossilized embryos are even harder to encounter. This is the first time a non-avian dinosaur has been found sitting on a nest of eggs that preserve embryos. A few adult oviraptorids have been previously found on nests of their eggs. But no embryos have ever been found those eggs.

The team conducted oxygen isotope analyses. That indicates that the eggs were incubated at high, bird-like tempeatures. This further supports the hypothesis that the adult died in the act of brooding its nest. Moreover, although all embryos were well-developed some appear to have been more mature than others. Hatching at slightly different times is a characteristic that appears to have evolved in oviraptorids and some modern birds.

Additionally, researchers found a cluster of pebbles in the abdominal region of the adult specimen. These are almost certainly gastroliths or "stomach stones". They would have been deliberately swallowed as an aid in food digestion. These stones may provide new insights into the diets of these animals.