Scientists discover how to make breathable oxygen on Mars 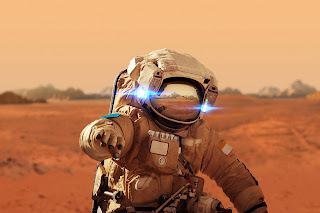 NASA scientists may have found a way to make oxygen on Mars, a new experiment suggests. The new method is crucial to lunch a rocket off the surface of Mars especially that NASA plans to land astronauts on Mars in the 2030s. NASA's Perseverance rover carries a device to convert Martian air into breathable oxygen. The Mars Oxygen In-Situ Resource Utilization Experiment (MOXIE) is an experimental instrument focused on future human exploration efforts. If it successfully produces oxygen on a larger scale on the red planet.

NASA could also use it for fuel to come back to Earth. Rocket propellant is the heaviest resource that astronauts will need to make the first crewed trip to Mars easier, safer and cheaper. Launching a rocket off the surface of Mars will require industrial quantities of oxygen. A crew of 4 astronauts would need about 25 metric tons (55,000 pounds) of oxygen to produce trust from 7 metric tons (15,000 pounds) of rocket fuel. NASA scientists want the Mars mission's crew to make oxygen out of the red planet's atmosphere instead of shipping it from Earth.

The first generation of these oxygen generators will be shipped aboard NASA's Perseverance rover for testing. Such tools could help us live off the land and resources available in the environment. These can help astronauts find water ice that could be melted or generating oxygen for rocket fuel and breathing. According to NASA, breathing is just a side benefit of MOXIE's true goal. Mars' atmosphere poses a major challenge for human life and rocket propellant production. It's only 1% as thick as Earth's atmosphere and is 95% carbon dioxide.

MOXIE pulls in Mars' thin air with a pump. Then it uses an electrochemical process to separate two oxygen atoms from each molecule of carbon dioxide, or CO2. As the gases flow through the system, the produced oxygen is analyzed. All the gases are then vented back into the atmosphere after each experiment.

MOXIE is a little device with a variety of heat-tolerant materials. It is designed to make about 6 to 10 grams of oxygen per hour. This is enough to allow a small dog to breathe. A full-scale system geared to make propellant for the flight back to Earth would need to scale up oxygen production technology by about 200 times.