The first pink supermoon of 2021 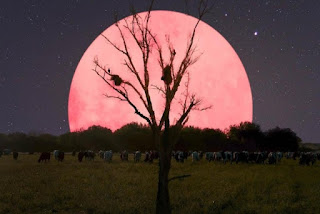 The first pink supermoon of 2021 will glow in the sky in April. The next supermoon is set to rise on April 26 and 27. The full Moon will be 357,378km (222,064mi) away from Earth. A super moon is closer to Earth and therefore appears bigger and brighter in the sky. When observing the moon from Earth. The full Moon will be slightly closer to the Earth than the March full Moon was it may look up to 14% bigger than usual. April's full moon will be the second-closest full moon of the year.

The pink supermoon will appear with its usual golden color near the horizon. Then it will become brighter as it rises in the sky. It is only referred to as a "pink" supermoon because it usually corresponds with the spring bloom season. The Moon is moving away from Earth at almost 4 cm (1.6in) per year. A full moon is roughly 6 times brighter than the half-moon. This is mainly influenced by shadows and the Sun's position. When the Moon is full, the Earth is between the Sun and the Moon.

So when we look at the Moon rising in the evening the Sun will be behind Earth. That means the side of the Moon facing Earth is fully illuminated. So we see the maximum amount of the Moon lit up. For a supermoon to occur, it needs two keys elements. First, it needs to be at its closest approach to Earth (Perigee). Second, it needs to be at the full phase when happens every 29.5 days when the sun fully illuminates the moon. 2021 is witnessing the rise of four supermoons in March, April, May and June. The closest supermoon this year will glow on May 26. May's full moon is often called "flower Moon".