The Most Detailed Map of the Observable Universe 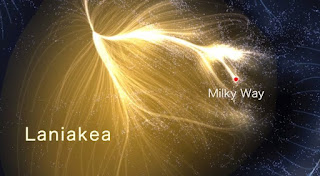 This is the most detailed map of the Universe to date. It contains over 100,000 galaxies and spans more than 500 million light-years. As massive as this is, an exciting discovery from this map was right here at home our Milkey Way galaxy! Galaxies tend to huddle in groups called clusters. When these clusters clump up, they create superclusters. The Milky Way galaxy is part of a supercluster and the map showed that ours is actually about 100 times bigger than we thought for years!  Astronomers mapped the enormous region using a new way to define the boundaries of superclusters.
They named this supercluster Laniakea which is Hawaiian for immeasurable heaven'. The team gathered data on more than 8,000 neighboring galaxies. They mapped their positions and movements in space. This method is superior to simply mapping the location of matter as it involves observing how galaxies affect the space around them instead of needing to see them directly. This enables us to build a map of uncharted regions of the Universe!
Scientists previously placed the Milky Way in the Virgo Supercluster. Under the new method, this region is seen to actually be an appendage of the much larger Laniakea. Which is 520 million light-years across and contains the mass of 100 million billion suns! Although the map is comprehensive over the space around the Milky Way its measurements become less accurate as we look further away.
However, adding more galaxy measurements will improve the map and could eventually help scientists to fully uncover what is behind the motion of our local group of galaxies. In a previous project, astronomers constructed the first map of the Universe. based on the positions of supermassive black holes which revealed the large-scale structure of the Universe. In this project, the map precisely measured the expansion history of the Universe back to when the Universe was less than 3 billion years old.
Astronomers also measured the positions of quasars are extremely bright discs of matter traveling around supermassive black holes at the centers of distant galaxies. The light reaching us from these objects left at a time when the universe was between 3 to 7 billion years old. This means the light started its journey long before Earth even existed. To make this map, researchers used the Sloan telescope to observe more than 147,000 quasars.
These observations gave the team the quasars' distances which they used to create a three-dimensional map of where the quasars are. The map findings are in agreement with the standard model of cosmology that researchers have built over the last 20 years.
In this model, the Universe follows the predictions of Einstein's General Theory of Relativity but includes components that, while we can measure their effects are caused by forces we still do not know. In some ways, scientists actually hope for new findings to differ from their established models that could lead to answers to some of the countless mysteries of cosmology.
Location: Australia