Humans could someday envolve to secrete venom, just like snakes. 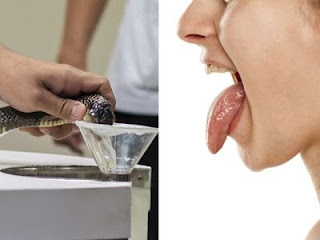 Humans have the biological to be potential venomous, just like snakes. While humans are not venomous, they have the necessary, "tools" for the function. Researchers have found that snakes and mammals share a set of genes that have similar activity within salivary and venom gland tissue. For the study, researchers looked at the genes that were present before venom's origin.

These common genes provide and important foundation for evolving venom by ensuing that the glands can produce high loads of proteins. The study include under the right evolutionary conditions human salivary glands could be repurposed to play a venomous role. Researchers don't know how oral venom systems originated and most research on venom evolution has focused on the toxins.

These oral venom systems evolved multiple times in numerous vertebrates during evolution. Researchers show the these systems likely originated from a "gene regulatory network". They found this network to  to be conserved in reptiles, birds and mammals. Researchers identified around 3,000 of these genes.

Then they looked at the venomes of other species including mammals like dogs, chimpanzees and humans and found that they contained their own versions of these genes. These were abundant in the human salivary gland. Venoms are cocktail of proteins that animals have weaponized to immobilize and kill prey, as well as for self-defense.

Venom can be found in so many different animals including jellyfish, spiders scorpions, snakes and even some mammals. Previous studies have shown that male mice produce compounds in their saliva that are highly toxic when injected into rats.

Researchers concluded that under certain ecological conditions we might encounter venomous mice in a  few thousand years.