Researchers discover a gene that could help prevent Alzheimer's disease 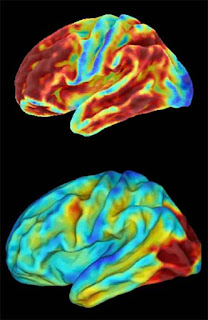 Researchers identified a gene  that could help prevent or delay Alzheimer's disease. Boosting the expression of this gene may reduce the formation of plaques of misfolded proteins linked to Alzheimer's development. Alzheimer's disease is the sixth leading cause of death in the US annually killing more than 120,000 people.

There is no treatment that can be effectively prevent or slow this disease. An estimated 5.8 million Americans aged 65 or older have Alzheimer's and that number is expected to more than double over the next 30 years. The gene known as ABCC1 prevent this memory-robbing disease from developing. The ABCC1 gene, also known as MRP1, has previously been shown to remove a palque-forming protein known as amyloid-beta (Abeta).

Abeta is the main component of the amyloid plaques in cells that surrounded and protect the brain and cerebral spinal cord. Results suggest that ABCC1 could export Abeta out of the brain. Increasing the expression ABCC1 to reduce Abeta production thus preventing of delaying the onset of Alzemer's. Compound that can dramatically increase ABCC1 transport activity or that can increase ABCC1 expression may prove to be suitable drugs for the treatment or prevention of Alzheimer's disease.

They will work by increasing the clearness  of Abeta from the brain and by reducing the amount of Abeta that is produced.  Symptoms of Alzheimer's include memory loss, learning difficulties and problems coping with new situation. The person  with Alzheimer's could also experience difficulties with language and face problems reading, writing and working with number.

They study results confirme that ABCC1 exports from the inside of cells to the outside of cells. Furthermore, a drug used to ease nausea and vomiting increases ABCC1 transport activity. The drug known as thiethylperazine could become a treatment for Alzheimer's disease.