Scientists create embryos of the world's most endangered mammal. 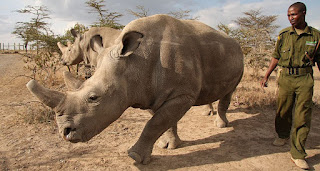 The northern white rhino used to live in east and central Africa but poaching led to a sharp decrease in its numbers. The team successfully performed an oocyte collection in Kenya. Oocyte collection is a procedure in which eggs are taken from ovaries. The recovered oocyte were transported from Kenya to a laboratory in Italy.

In the lab, scientists fertilized oocytes with sperm from a deceased northern white rhino bull 8 eggs were fertilized, but only 2 developed into a viable embryo. The increased the total number of viable embryos produced so far to five. The five embryos are stored in liquid nitrogen at a laboratory in Italy waiting to be transferred into a surrogate mother.

The team hopes to be able to deliver the first calf in 3 years and to grow a bigger population in the next 20 years. Two  females in Kenya are the only remaining northern white rhinos in the world. To prevent the extinction of the northern white rhino the team harvests immature egg cells from these two females.

In December 2020, the team started preparations for the next phase of the project which involves transferring the embryos into southern white rhino female.

Researchers say that the northern white rhino can still be saved  despite challenges and delays caused by COVID-19. The COVID-19 pandemic seriously affected the process of oocyte collection and fertilization in 2020.