Which countries are leading in COVID-19 vaccinaton? 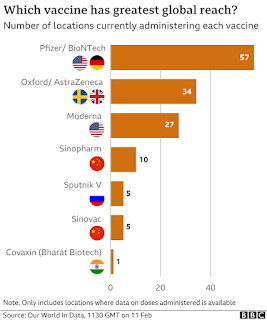 Countries are racing to inoculate their populations with COVID-19 vaccines. Some countries are reporting remarkable progress in mass vaccination efforts while others are facing various obstacles ranging from vaccine availability to vaccine hesitancy related to uncertainty about vaccines' safety. The European Commission said it has launched legal action against the UK-Swedish company AstraZeneca.

The EU accused the company for branch of contract after the number of delays in supplying COVID-19 vaccines. One way to evaluate vaccination progress in different countries is to calculated the share of the total population that received at least one vaccine dose. This may not equal the share of people who are fully vaccinated, if the vaccine requires two doses. Based on this method, data shows that Israel is leading the vaccination race 62.26% of the Israeli population already received at least one dose of the vaccine.

The UK is in the second place with 49.85%. While the UK is way ahead of the rest of Europe on total vaccination admministered. Other countries are ahead in terms of the percentage of their population fully vaccinated against the disease. This means those who received two doses of the vaccine  42.15% of the US population received at least one dose of vaccine.

This a very high rate for a population of around 330 million 41.83 of the population in Chile received at least one vaccine dose. 39.26% of Bahrainis received the COVID-19 vaccine.