Energy from underwater volcanoes could power the USA 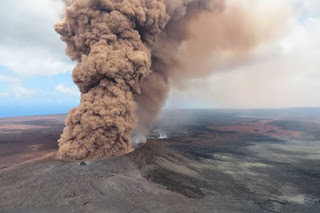 Energy released by submarine volcanoes could power a continent.The majority of Earth’s volcanic activity occurs underwater mostly at depths of several kilometers in the deep ocean. Underwater volcanic eruptions can release massive amounts of energy at a rate high enough to power the whole of the United States. They would from undersea rivers of lava and disperse massive clouds of ash. It was thought that deep marine eruptions only produced slow moving lava flows.

But data has revealed a link between the way ash is dispersed and the creation of large and powerful columns of heated water. These discharges known as megaplumes rise from the ocean floor to the surface. These megaplumes contain hot chemical-rich water and act in the same way as the atmospheric plumes seen from land-based volcanoes. First they spread upwards and then outwards carrying volcanic ash with them. The size of megaplumes is immense. They could carry volumes of water equivalent to 40 million Olympic-sized swimming pools.

They have been detected above various submarine volcanoes but their origin has remained unknown. Research shows that they form rapidly during the eruption of lava. The rate of energy required to carry ash to the observed distances is extremely high. Research shows that release of energy from submarine eruptions is so rapid that it cannot be supplied from the erupted molten lava alone.

Instead, submarine volcanic eruptions lead to the rapid emptying of reservoirs of hot fluids within the earth’s crust. As the magma forces its way upwards towards the seafloor it drives this hot fluid with it. Researchers conclude that the plumes must have formed in a matter of hours creating an immense rate of energy release.