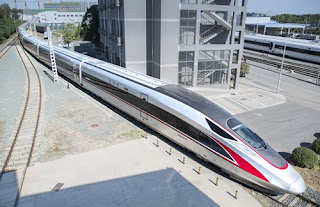 China's new high-speed train prototype could reach speeds of 620 km/h (385 mph). The new model uses the high-speed temperature superconducting Maglev technology. Researchers say their method could lead to superfast but cheap travel in the future. The train could complete a trip between London and Paris in 47 minutes. A commercially viable product could be ready in 6 years. "Maglev" is short for magnetic levitation. The first commercially operated Maglev train opened in Shanghai in 2004 while others are in operation in Japan and South Korea.

In Maglev, superconducting magnets suspend a train car above a U-shaped concrete path. Engineers designed a 21-meter-long (69 feet) prototype.  It uses high-temperature superconducting (HTS) Maglev technology. Researchers claim that it is more lightweight and has a simpler structure. It is also cheaper to manufacture and operate. The engineers considers the HTS technology more suitable for the advanced vacuum transportation. It could make future ultra-high-speed Madlev trains travel in vacuum tubes in speeds over 1,000 kilometers (621 miles) per hour.

The HTS technology can make the train float in the tube without electricity and it can be moved with just one hand. Researchers also built an experimental railway track. The line is 165 meters (541 feet) long. It will be used to test the prototype and related technologies. China's existing high-speed passenger trains can travel at a maximum speed of 350 kilometers (217 miles) per hour.

China has the world's largest high-speed railway network. It measures 35,000 kilometers (21,747 miles). The distance is more than two-thirds of the world's total. The country's total railway coverage is 139,000 kilometers (86,370 miles). It is enough to wrap the Earth three times by the equator.