The last days on Earth 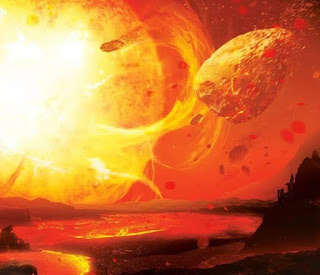 The last day planet on Earth: 5 to 7 billion years from now, Our sun will turn into a Red Giant. Its Cycle will come to and end. As our sun continues depleting its supply of hydrogen and helium. It will expand further and further until it reaches 256 times its current size. 5 million years later, the red giant will sweep through the inner solar system. Mercury and Venus will get swallowed by the expanding red giant. The rising temperatures will cause excessive amounts of rain and wind which will lead to major damage across the planet. The temperature on Earth’s surface will reach more than 2,400 k (2,130 or 3,860).

Earth will lose its atmosphere, which will cause planes to fall from the sky. The land will be covered with metals and metal oxides as well as icebergs of refractory. The intense radiation and heat will make it impossible for life on Earth to exist. Due to extreme heat, the carbon in our atmosphere will not be replenished. The lack of carbon dioxide will slowly kill all the plants on Earth. The death of plants that produce oxygen will lead to a major drop in oxygen levels across Earth.

This will kill all the remaining mammals and birds on our planet. Creatures that require less oxygen will survive a little longer. As temperatures continue to rise, the insect population across the planed will die out. Leaving behind only microbial life, just as Earth had billions of years ago. Tardigrades that can withstand high radiation and extreme temperatures will be the last creatures on Earth to survive the death of our sun. Our home, planet Earth, will no longer be in the habitable zone.

After boiling under intense heat, all the oceans will evaporate. Once all the water is gone, Earth’s surface will mainly consist of a massive lava ocean. Without water on Earth, the tectonic plates will completely stop moving. In about 7.59 billion years, Earth and moon will likely be engulfed by the red giant. As the red giant expands, a new habitable zone will form in our solar system. This new habitable zone will stretch into the Kuiper Belt and far beyond Neptune.

The icy worlds will melt, and liquid water will be present beyond the orbit or Pluto. Humans could build colonies and settlement in the outer solar system. Neptune’s moon Triton and the dwarf planet Eris could be our new homes. As the red giant burns out, it will collapse into a planetary nebula. The sky of the newly inhabited worlds will look magnificent. The colorful space clouds of the planetary nebula will be visible in the sky. As the planetary nebula collapses further, the dying star will become a white dwarf.

Over the next hundred million billion years, the white dwarf will cool down. After exhausting all its energy, the white dwarf will no longer emit significant heat or light. 1 quadrillion years later, our sun may eventually turn into a black dwarf. The once massive star that provided heat and light to our planet would become a cold object the size of planet Earth. A visitor from another world who will venture into what’s left our solar system won’t likely recognize that a civilization once existed in this region of space.