Astronomers discover a planet that's mostly made of iron. 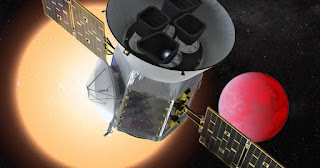 Astronomers discovered a new planet that's mostly made of iron with an eight-hour year. The new planet is called GJ 367 b. The planet takes only 8 hours to orbit its star. GJ 367 b is 31 light-years from Earth. Its surface temperature may reach 1,500 degree Celcius (2,730 Farenheit). This is hot enough to melt all rock and metal. It is one of the lightest among the nearly 5,000 exoplanets that are known to us today. GJ 367 b has half the mass of Earth. It has a diameter of just over 9,000 kilometers (5,600 miles).

By determining its radius and mass researchers classified GJ 367 b as a rocky planet. The discovery was made during the team's search for a "second Earth". The discovery also show astronomers' ability to determine the properties of even very small planets. In the study, researchers calculated the size and mass of the planet using two methods. Both of which involved analyzing the light of the plant's star. They found that its radius is 72% of Earth's radius and its mass 55% of Earth's mass.

The researchers were also able to draw conclusions about the exoplanet's inner structure. GJ 367 b is a low-mass rocky planet but has a higher density than the Earth. The high density indicates the planet is dominated by an iron core. These properties are similar to those of Mercury.

Mercury has a disproportionately large iron and nickel core that differentiates it from other terrestrial bodies in the Solar System. However, the plant's proximity to its star means it is exposed to an extremely high level of radiation. These radiations are more than 500 times stronger than what the Earth experiences.