Plants communicate with each other underground electrical signals 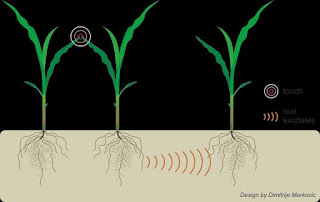 For the new study, the team designed an electrical circuit and corresponding mathmatical model that outlines the process of plant communication. This modeling would allow researchers to simulate the communication processes on a computer instead of conducting costly and lengthy experiments. Researchers said that it is possible for signals to propagate through the root network and spread in the common ground or soil from a tomato polant to an oak for example.

The nature of the message being sent is still a mystery. The possibility of knowing what kind of message are transmitted was beyond the scope of the experiment. Another important aspect that could be tackled is studying the plants' communications via electric waves through the air.

The majority of vascular plants have a relationship with a fungus in their roots. This relationship allows them to receive nutrients from the soil. It is so important that most plant species would not  be able to survive without it.